The Shiliupu Dock of Shanghai was a place enriched fully with the Shanghai Bund history. It features numbers of longtangs and traditional Shanghainese Shikumen buildings where one can track down all the historical stories happened in this once prosperous era. 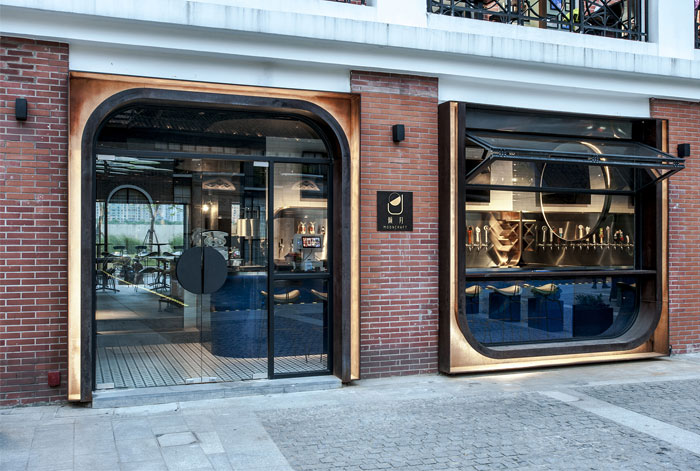 Located on No.505 Zhongshan South Road, the Cool Docks was originally a grease factory in the old days. Once a top ten creative hubs in Shanghai, it was renovated in 2018 and is now attracting new restaurants, coffee shops and bars to settle in. MOONCRAFT, among one of them, is launched at this celebrated spot on the South Bund. 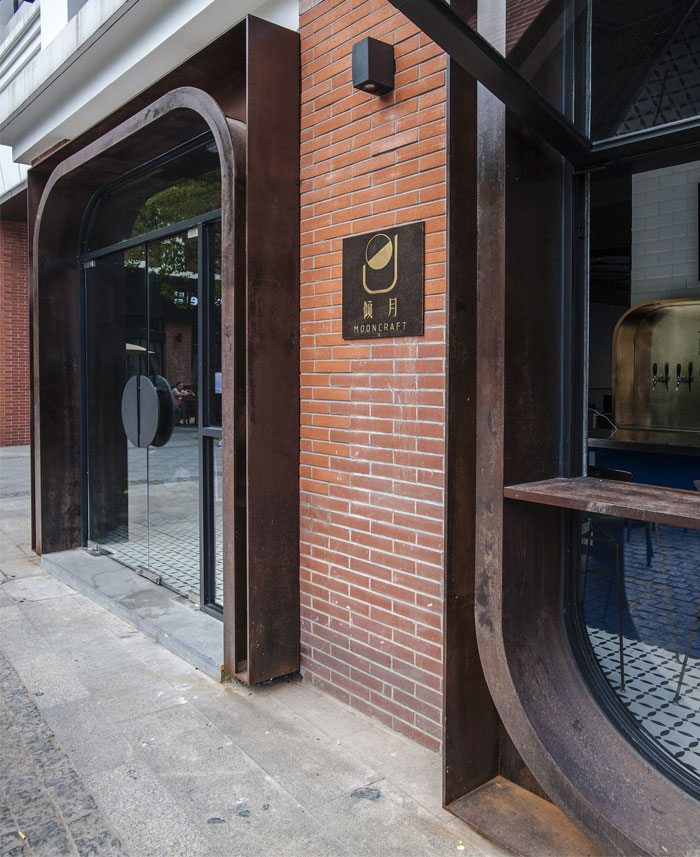 Choosing the Cool Docks as the first boutique bar’s location, clearly the Client has high expectation and requirement. From the design perspective, o&o studio set out two key directions in creating MOONCRAFT. First of all, MOONCRAFT occupies three connecting ground level units right next to the Cool Docks Wai Ma Lu entrance, with dual aspects facing the Cool Docks central plaza and water feature, and the South Bund on the opposite side. Although the total area is a merely 130sqm, the Client requested a variety of functions to take place within it. This includes hand-crafted beer bar, whiskey bar, restaurant, and a rarely seen robotic bartender. In regards to the spatial arrangement, this is something important for o&o studio to look at, especially on how to absorb and make good use of the existing structure and give the units a new lease of life. 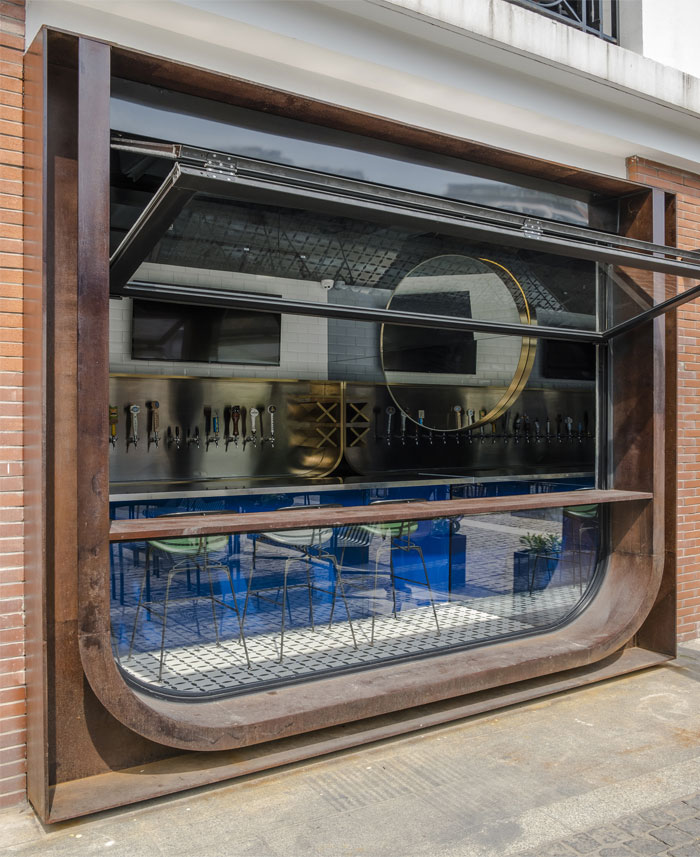 Secondly, the site is packed with references such as the river, the docks and the warehouses which also became the first “ingredients” of the project’s design, while the Shiliupu era should also be remembered. With these inspirations, o&o studio is determined to craft a booze place that is filled with “moments”. 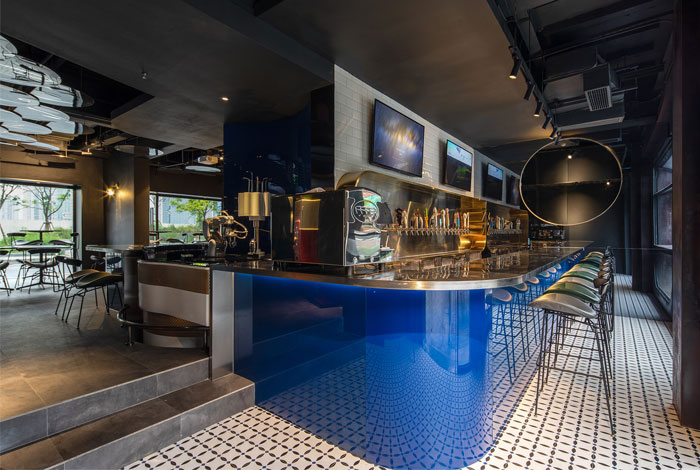 The branding of MOONCRAFT integrates all the design elements as one identity. From the bar’s name to its logo, as well as the architectural and interior design, they share the same concept throughout, all by o&o studio. 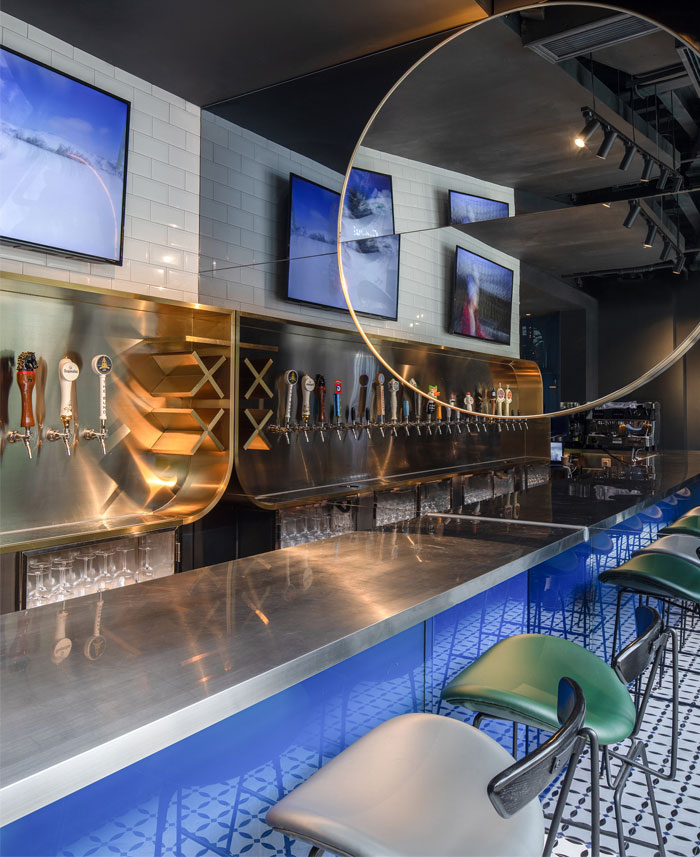 Imagine the full moon hanging above the Huangpu River, together with the river’s geometry that forms a glass that hold some of the richest history of the city with the yellow lunar gradually dipping into the glass, form the logo of MOONCRAFT. The name “MOONCRAFT” stands for a place that holds moment of dialogue, enjoying the best craft beet in town under the moon and starry sky adjacent to the Souths Bund. 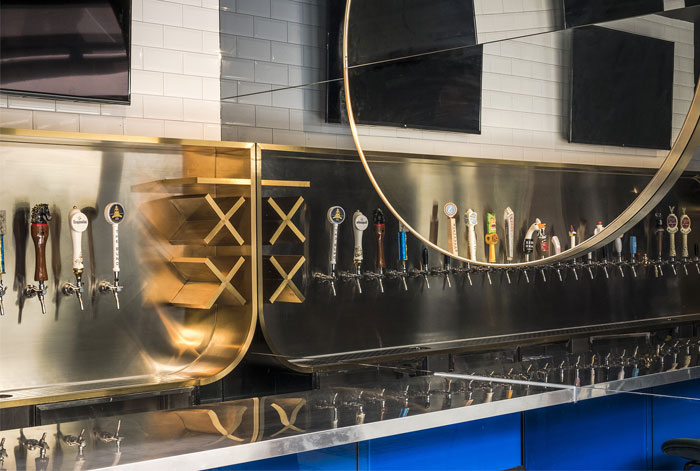 MOONCRAFT is zoned according to three key functions and features – hand-crafted beer bar, whiskey bar, and the robotic bartender. Considering the existing structural columns and sheer walls, o&o studio designed a U-shaped bar counter to associate the spatial relationship between the two bars. The U-shaped counter also “absorb” the existing sheer wall and by the making use of it, a hidden air-conditioned beer storage is formed. In-between the two bar counters found the robotic bartender which falls under most eye sights of the customers from both bar areas. 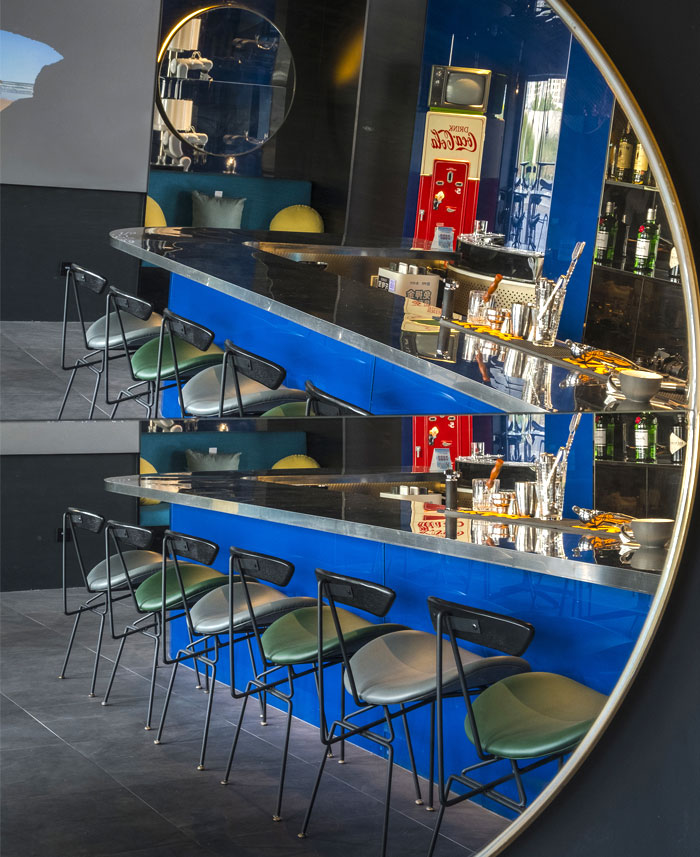 The beer and whiskey bars face the Cool Docks central plaza and the South Bund respectively. With restrictions on customizing the façade that faces the South Bund, o&o studio focuses on the side facing the central plaza, which is also MOONCRAFT’s main entrance. The concept of the façade is a dockside warehouse inspired weathering steel portals that plugged into the two façade openings which offer much needed depth to the slim brick wall. This gives MOONCRAFT a unique outfit among the other F&B units, and at the same time creating better use of space at the beer bar. The portals come as an inverted U-shape that form the main entrance, and an upstand U-shape with operable window and balcony that connects the inside and outside space. 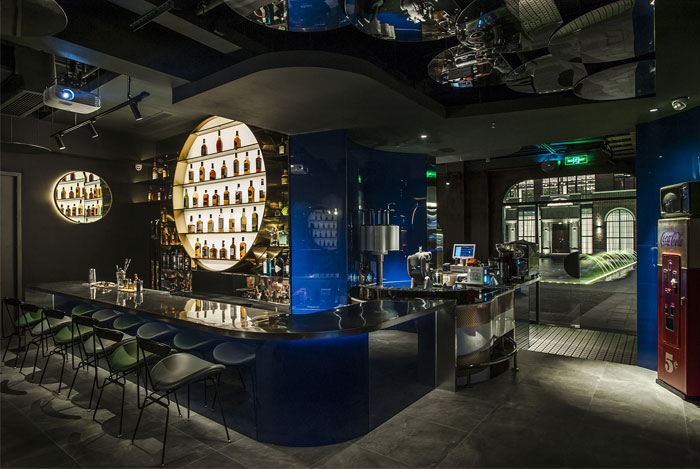 Through the main entrance is the hand-crafted beer bar, with a smaller floor area than the whiskey bar. o&o studio makes use of a black mirror wall to enlarge the space. As the name MOONCRAFT suggests, whereas the design concept is “Moments”, a circular mirror with a slender valley fold hangs on the mirror wall that creates a “mirror within mirror” effect imitating the floating moon on the Shanghai Bund’s sky. The circular mirror certainly talks to everyone and every little context, generating ever-changing and unexpected reflections. 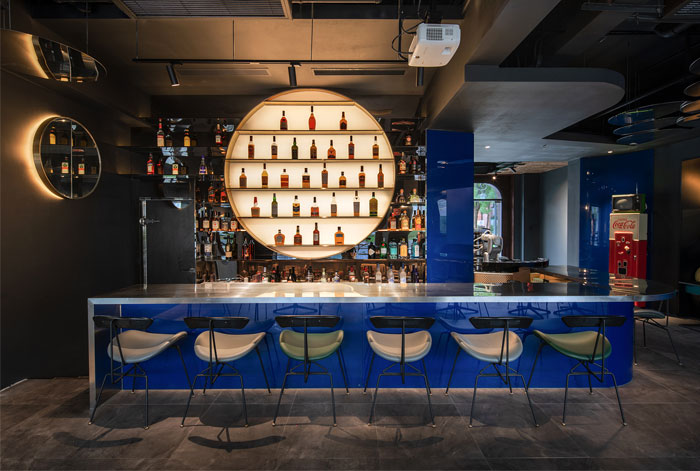 At the backside of the bar counter, a champagne gold s.s. steel portal framed an orderly line of beer taps. Towards the end at the mirror wall, o&o studio also incorporated a half of the Chinese word “Cool”, making use of the mirror to complete its entirety, escalating the joy at MOONCRAFT. 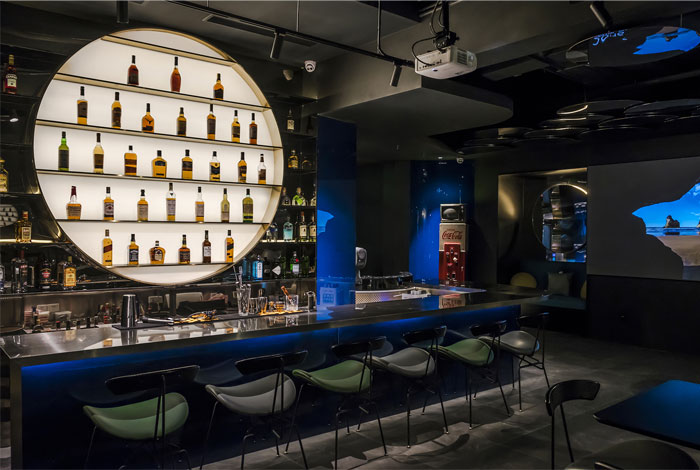 The rarely seen robotic bartender sits at the centre that allows interaction with customers from both bars as well as more directly at this interchanging point. Extending from the beer bar, the whiskey bar occupies the entire raised platform area. The level change perfectly allows a typical sitting height for this bar and restaurant area. The whiskey bar endures the “Moments of Moon” concept, where o&o designed a circular bar shelf that acts as a rising moon. 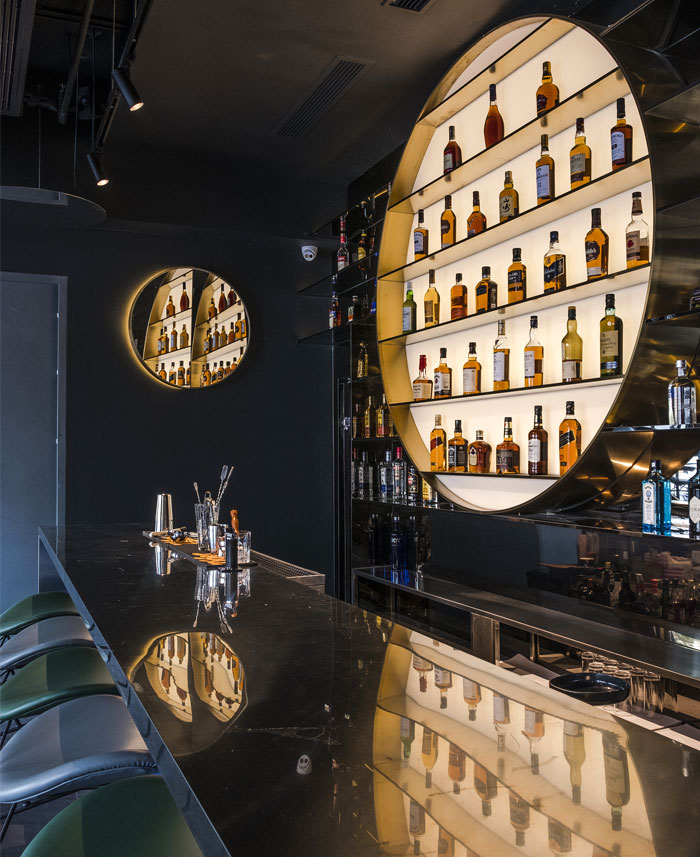 Around the restaurant area in front of the whiskey bar, there are a couple of feature seats for couples that face the windows overlooking the South Bund. On the other two sides of the restaurant are the kitchen and wc, and a solid wall on the opposite side. Originally this wall has two door openings that lead to the Cool Dock entrance. After the renovation, the landlord decided to fill up the openings. o&o take this as an advantage to provide sofa seats for casual drinking. Up above them is a feature ceiling with mirror finish s.s. plates to amplify the “Moments of Moon” idea, almost forging an inverted reflection of a rainy day. 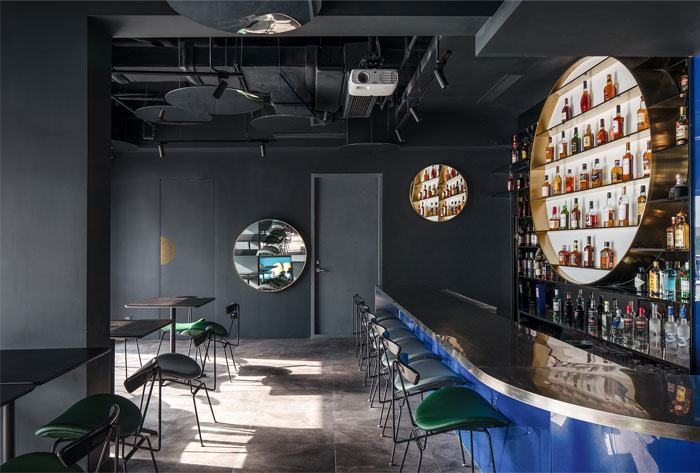 One might feel that MOONCRAFT is a little monochromatic. It is indeed not the case. o&o has made use of blue back painted glass at several designated planes which generate unexpected reflections, thus absorbed by the collective internal surfaces diffusing an essence of blue in MOONCRAFT. 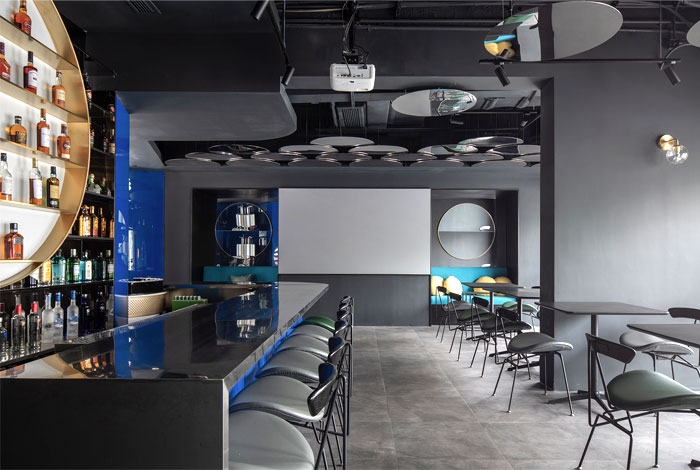 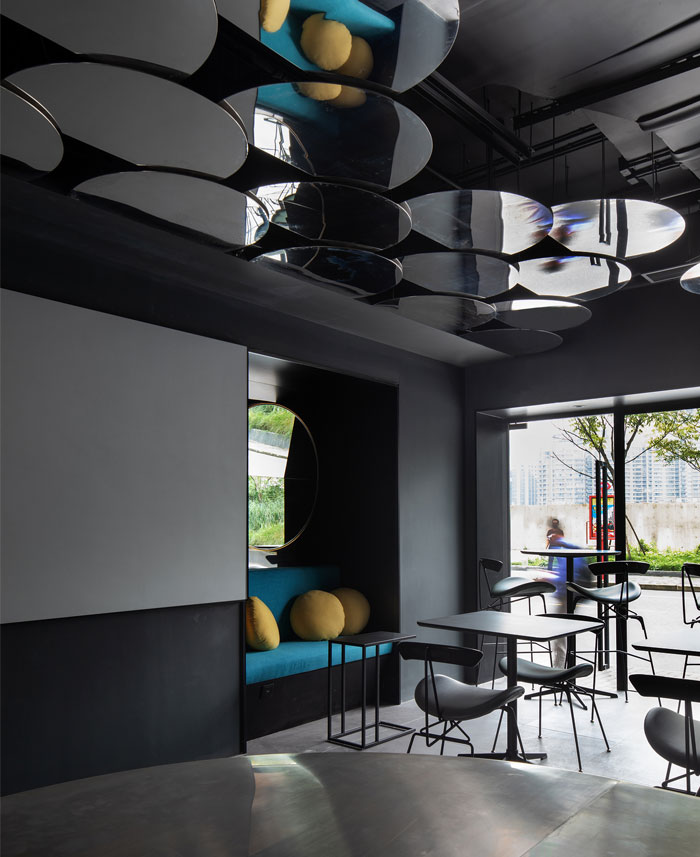 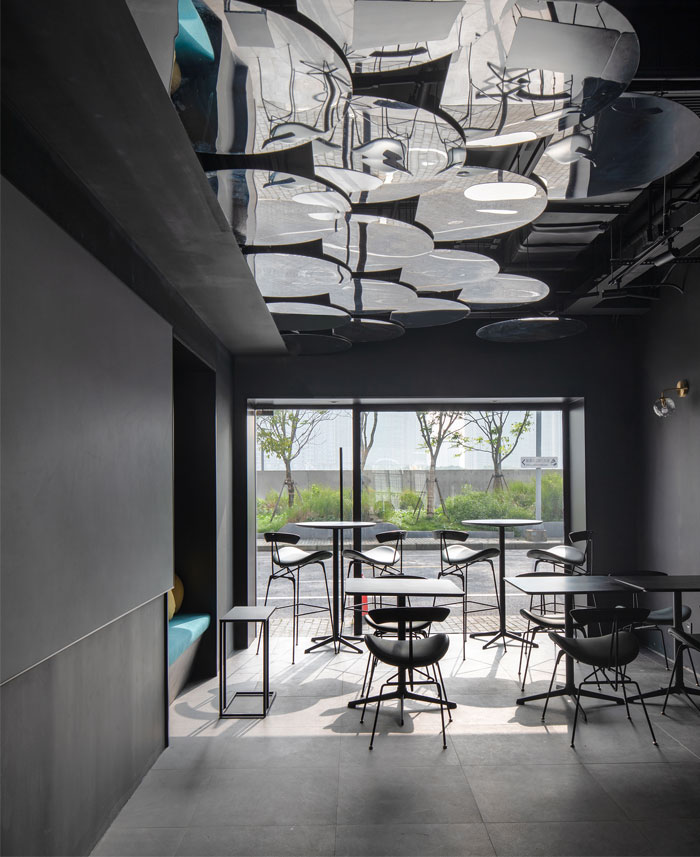 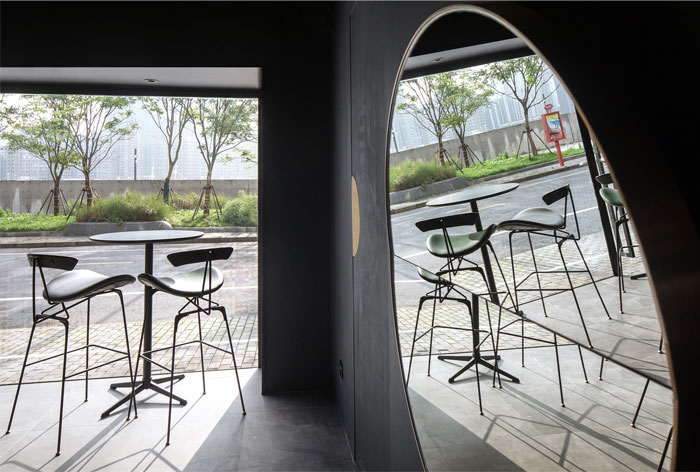